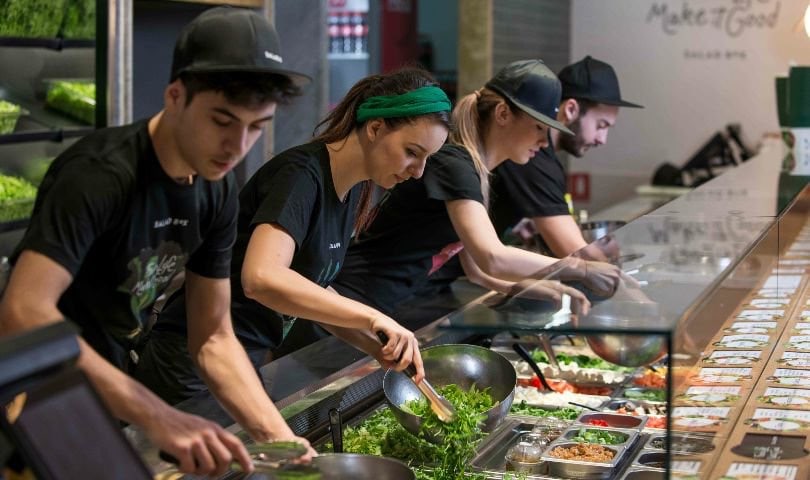 On a chilly spring day two of Lime’s Directors, Andy Cheetham and Kevin Thomas visited Salad Box in Londons Brick-lane. The Salad Box Franchise is a new system to UK franchising with a very appealing salad bar franchise concept. We met with Stephen Priest who kindly fed us with whatever salad we wanted. Now, we have to say at this point that those who know Andy & Kevin know that these are two guys who like a good meal. Two men of a certain age who would welcome sponsorship by Fray Bentos. Anyway, the salad arrived and the guys started eating after the customary Instagram photo just to prove to our families that we did in fact eat a salad for lunch.

Already trading in 12 countries with 55 franchise owners we quickly realised what we’d been missing all these years. As we munched our way through the layers we both said the same thing at the same time – this is filling! Don’t ask us how a salad can be filling but it was, in a pleasant non-bloaty way. I chose a “Most Wanted” and I was so impressed that as I write this I’ve completely forgotten what the others had. In the interests of market research for the benefit of all men of my age I just dived in and chowed down!

Whilst we were discussing the franchise I couldn’t help but notice how busy the store was. It was 2:45 pm and the place was packed! Delivery drivers kept coming and going, people were discussing business. Others were socialising. Everyone ate their entire meal! A Salad Box franchise provides a very healthy alternative to fast food and we could see an almost evangelical following of its customers. One thing we really liked was that all the food and its preparation was in full view. As a result, we felt that there was a real trust that your average burger joint simply doesn’t have. 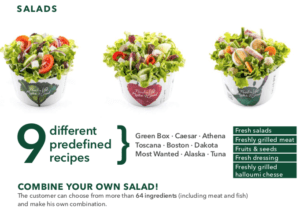 If a customer wants to personalise a salad they can do so by choosing the ingredients and mixing them however they like. Alternatively, customers can choose from 9 different recipes all of which are as fresh as can be.

Each Salad box also sells cream soups and smoothies, but one thing at a time for me! I’ll move on to those shortly. They did, however, look equally delicious.

Salad Box is a flexible retail format. Stephen described to us how a franchisee could operate a traditional store, a concession or several other formats. In addition to the Brick Lane store, a few new franchises are in the pipeline including one in Birmingham and also Dublin later in 2019. Investment wise every location varies significantly as you might expect, the company charges an industry standard royalty and marketing contribution.

Anyway, we are hooked! Now Salad Box is a client of Lime Licensing Group and we’ve all discovered the joys of healthy eating! As two previous salad dodgers, Kevin and I can heartily recommend it!

Lime Licensing Group are looking for owner operators, management franchisees and investor franchises. We think this is one of the best new retail format franchises in Europe. We’re party to confidential information so let’s just say that the financials are better than most – if you’re in the market for a retail format franchise then drop us a line! The brand is already a recommended franchise on Franchise Life as well as being an award winner in various other countries.

Contact Kevin Thomas today on 07527 508203 to receive the franchise prospectus with all the details of how you can get involved or fill in this contact form and one of us will get in touch.