Identical words mean different things to different people. Take the word guarantee for example. Now if there is one word that’s guaranteed to peak my interest it’s the word guarantee. Guarantee what exactly? And I mean WHAT exactly! I say this because I recently saw an advert by a franchisor intimating that they could guarantee success. 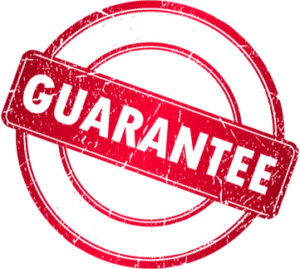 But they said it anyway, and what exactly is success? Well since you asked I personally think the most successful person in the world is the one who has achieved everything they want in their life. It’s likely to be someone like Neville our local courier who happily skips from our house to the next feeding every dog a biscuit as he wanders along. He whistles as he walks. All the dogs wait for him, and give him a friendly excited woof when he turns up. I can only think that our Nev has a box of biscuits bigger than his biggest parcel. My bitches love him. This means that success, like beauty, is in the eye of the beholder and no one else. Which means success can’t be guaranteed anymore than disappointment.

Those who guarantee anything are likely to be wrong. Not all of course, but most. Because that means some half wit wanna be franchise just with a limp and an IQ of 10 can rock up and be a success. It’s guaranteed you see. If you ever see any franchise guarantees in print then it’s time to get your microscope out. Searching for the guarantees that actually mean something tangible can be a fruitless exercise.

When it’s ok to use it

There’s only been the odd time I’ve used this in my near 30 year career in franchising. Firstly in 1995 with our family owned greeting card franchise called Appletree Cottage. We were training new franchisees on the job signing retailers up for them during their first week. I remember my Dad saying why not guarantee they’ll get their first 25 customers with the franchise? Seemed a good idea because our first week was usually around 40-50. So each new franchisee got a guarantee that we’d sign up their first 25 customers. We always did that comfortably. If for any reason we didn’t, we said we’d stay on in hotels and keep going indefinitely till we did. But we never had to.

The second and only other time is here at Lime Licensing Group where we speak with our clients about this type of thing. In doing so we let them know they shouldn’t be guaranteeing anything other than a process to their franchisees. In the same way that we guarantee our own process franchising their business but we can’t guarantee that they’ll be the next Mcdonald’s.

Guaranteeing a process puts you on safe ground, so too does guaranteeing a tangible figure that you absolutely know you can do – that’s ok too. But guaranteeing success means you’re most likely a deluded egomaniac or a con artist, and there’s quite a few of those currently active in the franchise industry too. Active now that they are out of prison anyway. Although I suspect they were conning people in prison as well. That’s a story for another day though.

If you’re looking to buy a franchise you need to watch out for sensationalist statements. This is your friendly warning from me to you. Sales hype based on fictitious forecasts is no good to the franchise investors looking for a place to invest their life savings.

This type of thing isn’t reserved for those selling franchises though. I read with interest how another franchise consultant proudly proclaimed that they had the best team in the world. Now, I know my topic and there was no measure I could find that remotely backed this up. Had they sold more franchises than us? No. Had they owned personally more franchise brands than us? No. Had they sold a higher financial value of franchises than us? No again. I’d rate them way behind the top consultant brands out there, and so would everyone else who knows there onions. In fact the boss man had never even owned his own franchise company and it couldn’t be true anyway because neither myself or any of my franchise specialists were in his consultant team – so there!

Seriously though, It’s a real problem this sort of thing. It’s misrepresentation just like offering a guarantee. Savvy people see right through this, but sadly most people are trusting and not savvy. These glib statements work their magic with naive people – investors and clients.

What to do about franchise guarantees.

So my advice to you as you consider your next move is to be a good deal more careful than you were thinking of being. Get someone else’s opinion of your plans, it doesn’t mean you have to act on their opinion, it just means you get an opinion that hopefully checks your enthusiasm.

Ask direct questions e.g. “have you or the Managing Director of this company ever been convicted of anything other than a minor traffic offence” Go on ask it, I’m being deadly serious. Then double check the answer elsewhere so you know who you are getting into bed with!

There’s no rush either, and if you are rushed by anyone then rush away in the opposite direction. “Someone else is interested in your area” they’ll say. Occasionally this is true, but take your own time none the less, however long that is. Mostly it’s not true, it’s just a double glazing sales tactic – don’t fall for it. If you hear it from us I can assure you it is true, we are more likely however to say “don’t worry you aren’t going to be gazzumpted because we’re not speaking to anyone else for that location”.

Armed with your new found scepticism, you’ll now be more careful won’t you? Hey, I know you will be!

Finally, with respect to the legals you will sign, if any promises or guarantees are mooted then always remember that if it’s not in the franchise agreement it doesn’t count – and that is one thing I can guarantee to you!

Read about the entire agreement clause in franchising