The history of franchising 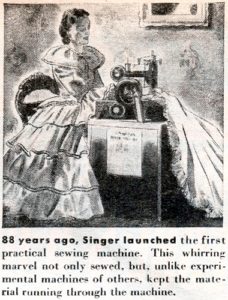 Isaac Singer is widely credited with being the founder of franchising. Their iconic sewing machine was quite expensive when it was first sold, certainly too expensive for the average american consumer. So Singer laughed a payment plan that enabled people to own it now, and pay for it later. A revolutionary way of doing business then followed – a franchise, kind of. Except it wasn’t called a franchise back then. Singer invented a license that enabled entrepreneurial clients to sell the sewing machines in certain areas o the USA. They got an exclusive area, something that is common in todays franchises. They also paid a fee to own the area, that’s something common in todays franchises too! The history of franchising was taking shape!

Franchisees, let’s call them that, also taught people how to use the machines. That promise of training, a payment plan and a license made the Singer proposition very appealing. They sold a lot of franchises which funded a lot of manufacturing. This was key because Singer needed the volume sales to make it all viable and franchising gave him that. Singer were manufacturers and distributors, and they even had reins on the quality of training. In todays world we would call that “control of standards”. Something that is in every franchise agreement.

If you want to see a whole timeline of the Singer corporation you can find it here. Todays sewing machines look more modern, but pleasantly similar to the first ones ever made. Who would have thought that they would be such a key part of the history of franchising? Todays franchise landscape looks very different. Franchising reaches into every part of commerce. Governments grant franchises for companies to run railways. Small private companies grant franchises for people to help them open a shop a few miles away. Franchising rocks! But at it’s heart franchising is a license, just like that which the Singer corporation offered all those years ago.

See some of the best franchises available today here.